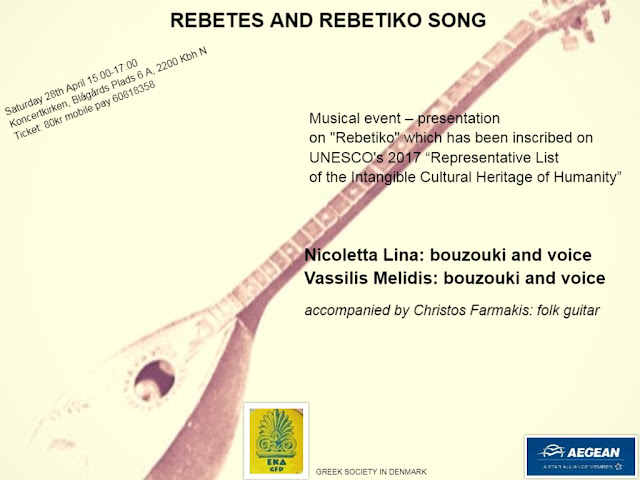 The Greek Society in Denmark organizes, on Saturday the 28th  of April 15:00-17:00, a musical event – presentation
on "Rebetiko" which has been inscribed on UNESCO's 2017 “Representative List of the Intangible Cultural Heritage of Humanity.”

Presented and performed by graduates of The Department of Traditional Music / School of Arts of the Technological Educational Institute of Epirus, Greece:
Nicoletta Lina: bouzouki and voice
Vassilis Melidis: bouzouki and voice
accompanied by Christos Farmakis: folk guitar

The Rebetiko song flourished in the first half of the 20th century and forms a separate chapter of Greek folk culture. With influences from the folk and the Asia Minor songs it reflects the historical and social context of the era and particularly the lives of the poorest and most vulnerable social groups. Today it represents a living and popular cultural heritage which is recognized not only by the Greeks, but also by the whole of mankind.

The content of the term ‘Rebetiko’ acts as an umbrella for three different musical genres and periods. Beginning with the Asia Minor destruction from 1922 until the 1950s with the Piraeus and the archontorebetico (bourgeois rebetiko) songs. Some composers composed songs for all three different periods.
In our present event will be performed songs by composers of all three periods.